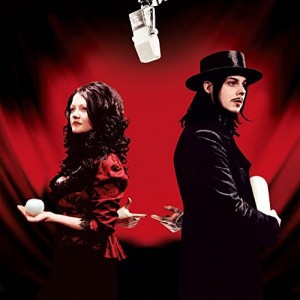 The White Stripes’ 2005, fifth studio album reminds listeners of the fundamental nature of their production. While still maintaining their iconic elements listeners can immediately identify with The White Stripes. Jack White trades in his classic, guitar heavy elements for piano ballads, mandolin, acoustic guitar and even some touches of marimba.

The Rolling Stone declared this album so “wild, it could make you weep over how pitilessly the Stripes keep crushing the other bands out there.”

‘Get Behind Me Satan’ ranked Number 3 on both US and UK Charts, trumping their preceding albums’ rank on US Charts. The album’s first track and single, ‘Blue Orchid’, became a fast radio hit in the US and UK, making it the band’s second UK Top 10 hit.

The album’s second single, ‘My Doorbell’, boasts a piano and drums charge, reviewed by NME as the “funkiest tune The White Stripes have ever put their name to.”

Slant Magazine invites listeners to “take solace in the unbridled honesty of simple, solid rock n’ roll” of ‘Get Behind Me Satan’, while Pitchfork crowns the album as some of The White Stripes’ best work.

‘Get Behind Me Satan’ is that raw, foot-stompin’, soulful sound that will take your imagination to that peaceful front porch in some cosy Southern cabin so sit back and stomp your foot to the melodic acoustic guitar, piano, stirring vocals and crickets.

Blue Orchid
The Nurse
My Doorbell
Forever For Her (Is Over For Me)
As Ugly As I Seem
The Denial Twist
White Moon
Instinct Blues
Passive Manipulation
Take, Take, Take
Little Ghost
Red Rain
I’m Lonely (But I Ain’t That Lonely Yet)