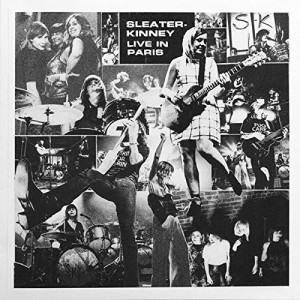 The thirteen track album, which features Carrie Brownstein, Corin Tucker, Janet Weiss and touring member Katie Harkin, was captured on March 20th, 2015 at the Paris’s historic La Cigale venue during the band’s sold out international tour in support of their acclaimed eighth album, 2015’s ‘No Cities To Love’.

‘Live In Paris’ includes songs from nearly every Sleater-Kinney album, including ‘No Cities To Love’, ‘The Woods’, ‘One Beat’, ‘The Hot Rock’, ‘Dig Me Out’ and ‘Call The Doctor’.

The recording was mixed by John Goodmanson at Avast and mastered by Greg Calbi at Sterling Sound.

Barry says: I know live records can sometimes get a bit of a tough rap, but this one has none of that shaky sound or hefty interval nonsense associated with it, it sound like their trademark technical melodic indie fare but with the overwhelming energy and vibes of a live show. If you like Sleater-Kinney, it's an essential, only slightly more essential that if you simply like a good old-fashioned rock-out.

Price Tag
Oh!
What’s Mine Is Yours
A New Wave
Start Together
No Cities To Love
Surface Envy
I Wanna Be Your Joey Ramone
Turn It On
Entertain
Jumpers
Dig Me Out
Modern Girl