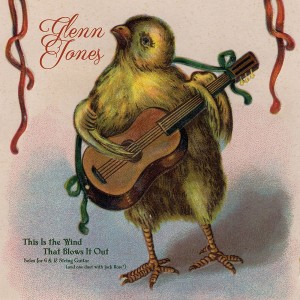 Glenn Jones’ debut album ‘This Is The Wind That Blows It Out’ was originally released in 2004 on CD only by Strange Attractors Audio House. Thrill Jockey are proud to give this timeless classic a first time vinyl issue.

Glenn Jones is a master of American Primitive Guitar, a style invented in the late 1950s by John Fahey, whose traditional fingerpicking techniques and wide-ranging influences were used to create modern original compositions.

Jones, who led the post-rock ensemble Cul de Sac, brings his own made-up tunings, the use of custom-crafted partial capos, and a highly skilled picking style on both banjo and guitar, to create personal compositions that are lyrical, emotive and elegant. What sets him apart from the myriad guitarists playing today is his ability to tell stories with the guitar and banjo and to convey a range of emotions. This process starts with the compositions themselves and carries through to his selection of recording environment and engineer.

‘This Is The Wind That Blows It Out’ stands the test of time in today’s avant folk movement with Glenn Jones emerging as a clear leader. His pensive sentimentality and playful spirit, not to mention his innovative technique, have become just as ingrained into the style’s DNA as any hallmarks of the original Takoma school.

Opening with the title tune, ‘This Is The Wind That Blows It Out’ meanders with heady grace, Delta-delica slide guitar as intoxicating as it is mournful. ‘Fahey’s Car’ bounces and shimmers like some of Peter Lang’s classic Takoma sides and ‘Linden Avenue Stomp’ is an alternate take of an old-timey duet with the late great Jack Rose.

Jones turned away from standard tuning years ago, inventing tunings as a way of escaping the known, his 2016 album ‘Fleeting’ gained much critical acclaim and his convivial live performances prove him to be a compelling storyteller as well as an outstanding musician.

Glenn JonesWelcomed Wherever I Go