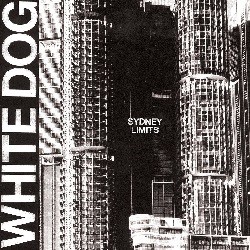 After their crushing debut 7" released in 2015, which saw lead single No Good get a full rotation to cult Sydney radio station FBi Radio and saw them join the stage with the likes of The Buzzcocks, Die! Die! Die!, Jon Spencer Blues Explosion and The Meanies amongst others, WHITE DOG return with their debut album, SYDNEY LIMITS. Recorded in one day by Wade Keighran (The Scare, Wolf & Cub) and mastered by Nick Franklin (MAKING, Unity Floors, No Art), this is an album that follows the template of all great punk records - just shy of half an hour, but loaded with 16 tracks of intense, unrelenting punk.

Much like the city it was bred in, WHITE DOG make music that has been pushed to the brink, but refuses to die. Taking cues from Black Flag, Cosmic Psychos, Venom P. Stinger and Sick Things, early US Crossover Hardcore ala COC/DRI, SYDNEY LIMITS explodes with deranged energy, seething with an anger that can only come from the forced nihilism of Sydney living. A cesspit of high costs and low value. Lose the bullshit, replace it with WHITE DOG.

Blind ShakeKey To A False Door