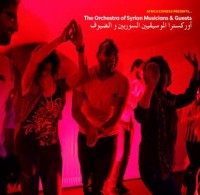 Following a series of acclaimed dates in the UK and Europe this summer, Africa Express today announces the release of a live album entitled Africa Express Presents….The Orchestra of Syrian Musicians & Guests, which will be released on 9th December 2016 by Transgressive Records.

All profits will go to the 50 members of The Orchestra of Syrian Musicians.

The recordings were made in June when The Orchestra of Syrian Musicians, featuring current and former members of the Syrian National Orchestra for Arabic Music, came together for the first time since the conflict in their country flared up five years ago. They were joined by artists from Britain, Syria, Algeria, Lebanon, Mali, Mauritania, Senegal, Turkey, Tunisia and the United States including Bashy, Bassekou Kouyaté, Bu Kolthoum, Damon Albarn, Eslam Jawaad, Faia Younan, Julia Holter, Malikah, Mounir Troudi, Noura Mint Seymali, Paul Weller, Rachid Taha and Seckou Keita.

The joyous and uplifting album showcases Syrian and Arabic music, alongside unique interpretations of some well-known Western songs. It features tracks recorded live at Southbank Centre’s Royal Festival Hall - a show described in a 5 star review by the Evening Standard as “an epic paean to their lost homeland”- as well as songs from the storming opening slot on Glastonbury’s Pyramid Stage and the Holland Festival in Amsterdam, Istanbul Jazz Festival and Roskilde Festival in Denmark.

"The album is very important to us. It was a very unique project, bringing together artists from all over the world to perform with the most brilliant musicians from Syria. It was a great honour. And this new album will give people another opportunity to get to know The Orchestra of Syrian Musicians for what we are - passionate, professional musicians and singers." - Raghad Haddad

The Overton Berry EnsembleTOBE + Live At The Doubletree Inn