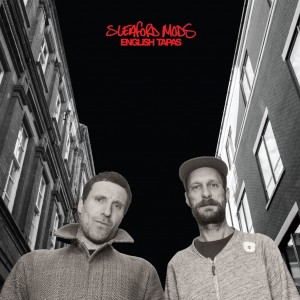 The album was recorded at Steve Mackey’s (Pulp) West Heath Garage studios in London. Jason Williamson discusses ‘English Tapas’: "Andrew walked into some random pub and saw "English Tapas" scrawled on the menu board. Underneath this beautiful coupling of words were it's components, half a scotch egg, cup of chips, pickle and a mini pork pie" It says everything about this fucking place. It's comedy, it’s make do, it's ignorant and above all, it's shit"

Barry says: Sleaford Mods hit us hard with another voracious and aggressive commentary on modern life with their trademark combination of wit and vitriol, backed by a thumping but decidedly downplayed backline. Snarling, punky spoken word passages and gritty dusty drum machines. If you like the Mods, this one won't change your mind. If you don't, it just might.