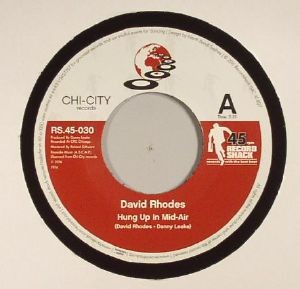 Record Shack keep the fire burning bright with this unlikely reissue of one of the rarest funky northern / modern soul / disco dancers of all time. Utterly mysterious, David Rhodes' "Hung Up In Mid Air" was originally found as a one-off Pye Acetate belonging to none other than Blackpool Mecca legend Ian Levine. Though he rocked the spot regularly with this gem back in the day, Ian kept its identity under wraps until a 7" on Chi-city records hit the shelves in 2002. Limited to a long gone 100 copies, that pressing didn't spread the word too far, so any ignorance around this one can be easily forgiven. A stunning slice of blue eyed soul, "Hung Up In Mid Air" sees the Peter Gabriel collaborator laying an emotive vocal over a punchy groove alive with wah guitar and slick bass. On the flip, Italy's finest Paolo Scotti & Giacomo Silvestri work their magic with a bubbling disco rework that should please fans of serious spinners like Sadar Bahar and Al Kent.