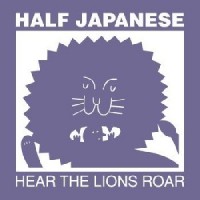 With Jad Fair at the helm for over four decades, the highly revered Half Japanese still remain “the ultimate expression of punk’s dictum that rock should be accessible to anyone who wanted to pick up an instrument and play” (AllMusic). Born out of the Fair brother’s lo-fi bedroom recordings of the mid-70’s, they reinvented rock music with their off-kilter view and popular outsider rock. Leading the lo-fi movement of the early 90s burgeoning indie rock scene, Half Japanese’s lasting influence and prolific output has seen them experiment with alternate tunings, chords and melody and in recent years they’ve produced more cohesive offerings. Wildly eccentric and humorous, the energetic ‘Hear The Lions Roar’ is an art rock record where Jad’s expertly thrown out lyrics remain optimistic and fresh alongside a fierce and compelling rhythm section. Featuring a cohort of past musicians from the 90’s, their dexterous instrumentation brings further depth to Jad’s songs.

A1. Wherever We Are Led
A2. Attack Of The Giant Leeches
A3. Here We Are
A4. It Never Stops
A5. Of Course It Is
A6. On The Right Track
A7. The Preventers