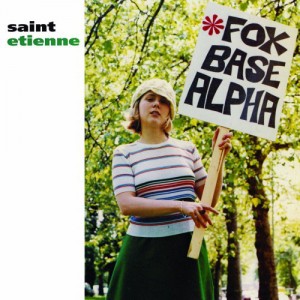 It’s hard to believe that Saint Etienne’s debut album ‘Foxbase Alpha’ turns 25 this year but the good news is that it still sounds as fresh, vibrant and relevant as the day it was released. Often hailed as one of the most important DIY albums of all time, ‘Foxbase Alpha’ became the first long player released on fledgling Heavenly Recordings in 1991 and went on to be nominated alongside ‘Screamadelica’ in the first ever Mercury Music Prize in 1992.

This special edition triple vinyl box set includes the original album cut over two discs at 45rpm plus a bonus album (at 33rpm) of associated recordings from the era, most of which appear on vinyl for the first time.

A one sided 7” single featuring a previously unreleased demo of Moria Lambert (vocalist for ‘Only Love Can Break Your Heart’) singing over a radically different version of ‘Kiss And Make Up’, plus a 32 page book and assorted inserts - including band photos, original press releases, Foxbase trading cards and a digital download code - complete the package.

The band kicked 25th anniversary proceedings off with three sold out shows where they performed the album in its entirety followed by a short set of career highlights. The shows were at London’s Heaven - scene of the first ever Saint Etienne show back in 1991 - and the Rockaway Beach Festival in Bognor Regis.