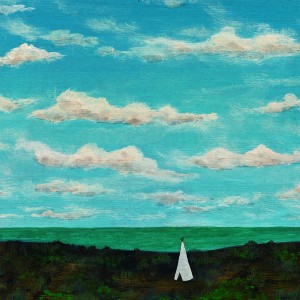 'The Drifters' is the debut album from London based French duo ZOOEY (Matthieu Beck and Marie Merlet) that takes the listener on a trip between idleness and daydream. A classy collection of eleven electronic retro futuristic pop songs, underpinned by drum machines and synth arpeggios that meld fluently with flutes, pianos and percussion, creating a laid back yet evocative noir cinematic listening experience.

Recorded in their London home studio, 'The Drifters' mixes the many influences and experiences of both musicians. Marie loves experimental pop and Sixties soul, she has been a long time collaborator of Laetitia Sadier in Monade and has just released her first solo album as Iko Chérie on Elefant Records. Matthieu was at the core of disco pop Parisian band Adam Kesher and is now involved in the London based indie group Oslo House as well as curating the ambient music podcast Love In The Afternoon. He's also the mystery French voice on the opening track of this years NZCA/Lines album.

The album invites the listener to action ('Realise Realise'), questions our relationship to the world ('A Good Night Sleep'), celebrates freedom and escape ('Time To Get Alone') but also acknowledges the difficulty of changing ('Marcher La Nuit'). Two instrumental tracks and one cover are at the heart of the record: 'Jóia' and 'Joya' are balearic soundtracks directly inspired by library music records. 'The Country Song' is an adaptation of 'Let's Move To The Country' by singer- songwriter Bill Callahan.

“Many years ago Matthieu and Marie cheerfully came up to me after a gig I was playing in south London with my band The Superimposers. They had emailed me out of the blue one year earlier with a remix of one of our songs. They did it without stems and without our permission and I loved it! So I released it. When they moved from Bordeaux to London we built up a true friendship, so when I heard their album ‘The Drifters’ I knew it had to come out on Wonderfulsound.”