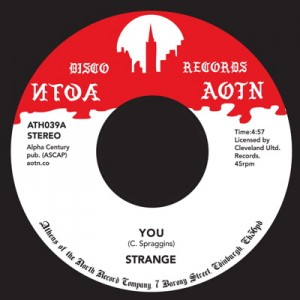 Christopher Spraggins & The Strange Band of Rochester, N.Y released a grand total of one record. Introduced to the world by Cleveland Unlimited Records who still exist to this day, that one record failed to sell, well, anything at all really, so Strange disappeared as quickly as they arrived, until now that is.

Our friends in (athens of) the north have cherry picked the best tracks off that long forgotten album and reissued them on every funk lovers favourite format, the glorious 7 inch.

So, get down people, to the spaced out, trippy, disco funk of Strange and make a bunch of old dudes in Rochester NY that little bit happier and that little bit wealthier.