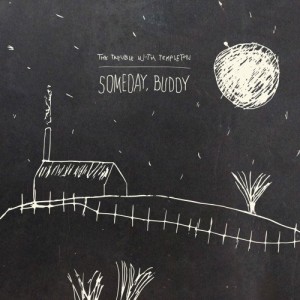 In the two and a half years since the release of their last album ‘Rookie’, Brisbane’s The Trouble With Templeton have, says frontman Thomas Calder, been busy “breaking down and re-assembling what it means to make music for us.” On the evidence of the richly confident and clear-sighted ‘Someday, Buddy’, released through Bella Union, that time was well spent.

The full-bodied songs here can take the emphasis, no trouble. The Trouble With Templeton weren’t slouching on ‘Rookie’, where Calder and company wedded vibrant melodies and multifarious alt-rock flavours - epic, jangly, glam - to a core of emotive cogency. On ‘Someday, Buddy’, however, their personality emerges sharper and clearer. “Our goal was to make a record that is raw, bare and honest,” says Calder, a claim borne out by the incisive lyrics of the swelling ‘Sailor’ and lilting ‘Heavy Trouble’, where Calder’s falsetto dances over a tender indie folk backdrop.

For The Trouble With Templeton, the album is the culmination of time spent refining the band’s qualities following extensive touring for ‘Rookie’. After taking time out to recharge their batteries, Calder, Ritchie Daniell (drums) and Sam Pankhurst (bass) recorded as a trio with help from their friend Matt Redlich; later, they were joined by another buddy, guitarist Jack Richardson. As a result, says Calder, the band’s bonds are “stronger than ever.” By the time ‘Someday, Buddy’ fades out with the understated confidence and poised beauty of ‘Sturdy Boy’ no one could doubt it.