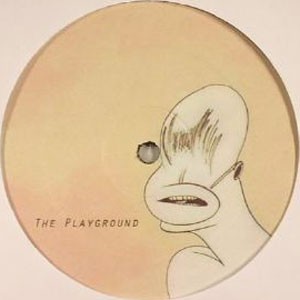 The Playground offers up its 9th release to date with honorary Ozzy (now via Berlin, Amsterdam AND London - phew) - Inkswel. This self-confessed drum machine obsessive (and former B-Boy) takes on the task of laying down 4 future-boogie jams on this up and coming label, aided and abetted by Henri Le Blanc, Sven Atterton & Man Made Mountain. "Visions Of Life" features Sven Atterton and is a lively number; soft keys and weaving B-line complimenting a whole manner of vintage drum boxes while glistening chords twinkle through the mix. "Patchouli & Nag Champa" slows things down for some proper smoochy, leftfield boogie. Squelchy synths, mystic leads and flurries of synth-sax are the main motifs of this intriguing soul nugget; full of radiance and intrigue until the very last beat. "All The Way Live" features Henri Le Blanc and veers off towards a slightly more housey direction. A huge, low-slung bass rolling around the low frequencies as clipped drums and warped melodies fight for dominance in other areas of the mix. Inkswel adds the icing on the cake in the form of a spoken word section of cultural observation - noting that most people in the current scene don't want to have random sex with strangers, instead a more conservative, let's get to know each other first system seems to prevail (!!!). Finally, "Pot Liquor Revisited" relives Inkswel's B-boy days as him and rapper Man Made Mountain collaborate on some proper street ready hip-hop. Well programmed beats, a really strong vocal and jazzy, crate dug instrumentation put this up there with Q-Tip and Dilated Peoples - an authentic slice of retroist rap music executed with aplomb! Wonderful stuff here from Inkswell - most recommended.

A1. Visions Of The Life
A2. Patchouli & Nag Champa
B1. All The Way Live Feat. Henri Le Blanc
B2. Pot Liquor Revisited Feat. Man Made Mountain