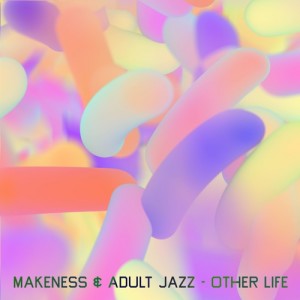 On "Other Life" the creative forces of Scottish producer Makeness and art pop four piece Adult Jazz combine to create an addictive slice of catchy disco-not-disco with post-punk influences. Makeness is the name of producer and songwriter Kyle Molleson. Having grown up in The Outer Hebrides it was at Leeds Uni that he meet Harry Burgess, Steven Wells, Tim Slater and Tom Howe of Adult Jazz. Drawing on influences from Afro Beat, New-Wave and techno in 2015 he had his debut release ‘Laca-Langa’, a thundering percussive track. Adult Jazz released two lovingly received records, 2014’s ‘Gist Is’ and 2016’s ‘Earrrings Off!’ (on Tri-Angle) and have established themselves as one of Britain’s finest new experimental pop groups, with lyrics that tackle questions of identity and belief. Prior to the release on Meno Records, a then unreleased ‘Other Life’ was remixed by Whities producer Minor Science. 15 dub plates were pressed up and stamped with MXMS, finding their way to Jamie XX, Ben UFO and Roman Flügel, who all played the track. The original track is now being released by Meno Records, with a limited run of 300 12” as well as being made available digitally. Fans of avant-disco will rejoice at the sound, with its loose and un-quantized groove, synth squeaks, flourishes and off-kilter vocal falsetto, it’s the artists but not as you know them and totally addictive. Makeness and Adult Jazz let their hair down and follow Arthur Russell’s advice; ‘First Thought, Best Thought’.