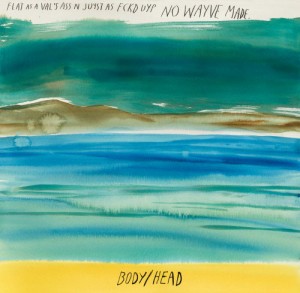 Instead of presenting ‘tracks’ or ‘songs’ from the record, this album should be considered a ‘moment’, one pinnacle set that was beautifully caught in time. World-renowned artist and longtime friend of Gordon’s, Raymond Pettibon, has made an original piece of art for the cover of the album.

“‘Coming Apart’ was arguably the heaviest record of 2013 and received with open arms and blown minds across the world. The fact that a record steeped so heavily in non-traditional structures and improvisation could touch so many people was not a surprise to anyone who had seen Body/Head in a live setting. ‘No Waves’ captures that raw improvisation and harnesses the power into a listening experience of pure, unmediated intensity.” - Ben Chasny (Comets On Fire, Six Organs Of Admittance)