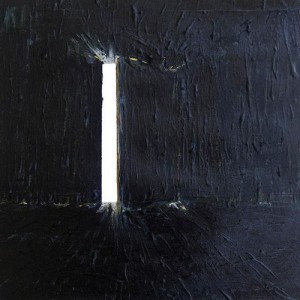 David Pajo’s been writing lines on the guitar since he was a kid. It sustained him through a lot of groups, like Maurice, Slint, Aerial M, Tortoise, The For Carnation, Dead Child and Papa M. The sounds he’s made on albums with names like ‘Live From A Shark Cage’ and ‘Whatever, Mortal’ implied danger, violence and total alienation alongside a peaceful, easy, good-willing and wide streak of broke-toothed black humour.

With a humble combination of sources Papa M has traditionally traced his music from aboriginal blues all the way through the rock and on into 21st Century classical, exploring moments via an audio-diary vérité. With each encroaching moment of ‘Highway Songs’ it sounds more and more like good old Papa M, as David throws back the veil of tears from recent times to bear witness to miasmic mood-clouds passing not over but through him. Music from where the mind goes when the body is broken. Reflecting time spent hooked up to machines. A good person with bad thoughts, a story told in fragments picked up off the bathroom floor.

The Papa M approach is laced with fun amongst the bristle, with loads of tasty playing and a dynamic that pits darkness vs light vs irreverence in a Mexican standoff. As before, it’s pretty much all played by Pajo, whose multi-instrumental flair (and Def Leppard-inspired one-legged drum technique) speaks of the gumption and optimism that has always run under his bridge, along with the blood and water and sperm, massed together in a hypnotic flow. All these things are what makes Papa M and it’s good to hear them and him again.

Barry says: Shining with the sort of instrumental flare seen in Pajo's former bands Slint and Tortoise (among others), this incarnation has a lot more of an acoustic playfulness. Upbeat melodies and interwoven guitar lines cascade into each-other before crackling with electronic shards and static flourishes. This is a finely crafted and impeccably produced collection of soulful electro-acoustic gems.