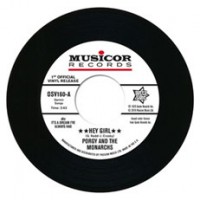 PORGY WILLIAMS and his Monarchs recorded a handful of singles in the mid-sixties on almost as many labels. They made their debut in ’63 on Mala Records before moving to Musicor where they scored two singles: “That Girl” / “If It’s For Real Baby” and “My Heart Cries For You” / “Think Twice Before You Walk Away”. Produced by Teddy Randazzo, all four sides are excellent but incredibly didn’t see any chart action at the time. Fortunately all was not lost and, almost a decade later, “My Heart Cries For You” became a much cherished dance floor anthem in the U.K. Our topside “Hey Girl” was recorded in New York for Musicor but was not released until 1975 when, quite by accident, it was wrongly pressed as the B-side to a reissue of “My Heart”. Musicor, realising the error, withdraw the disc… UNTIL NOW!!!

Catfish And The BottlemenThe Balcony