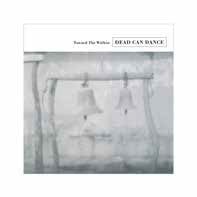 ‘Toward The Within’: Released in October 1994 and out of print on vinyl ever since, ‘Toward The Within’ was an audio and video document of the 1993 sell-out Dead Can Dance World tour. Recorded at the Mayfair Theater in Santa Monica, California, it marked one of the final performances at the historic theatre as it later suffered major structural damage in an earthquake in 1994. Despite being a live recording, ‘Toward The Within’ includes twelve previously unrecorded tracks as well as material from their six previous studio albums.