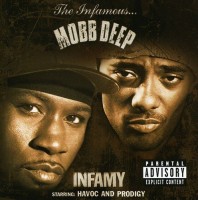 In 2001 Queensbridge rap duo Mobb Deep returned with their fifth album, moving away from the stripped-down violence-heavy gangsta rap of previous release "Murda Muzik".  At the time of "Infamy's" release, all eyes were on the beef between Jay-Z and Prodigy following Hov's diss track “The Takeover”, and Mobb Deep duly responded with the track “Crawlin”. Tracks like “The Learning (Burn)” featuring Noyd, “Kill That Nigga” and productions from Scott Storch (Dr. Dre/Nas/50 Cent) for “Live Foul” still display the dark beats and straight-up street rhymes Mobb Deep is known for. The first single of the album was the track “Hey Luv” featuring R&B group 112. Infamy sold over 800.000 copies in the USA alone, reached #26 in the US Top R&B/Hip-Hop Albums chart and has been certified Gold by the RIAA.