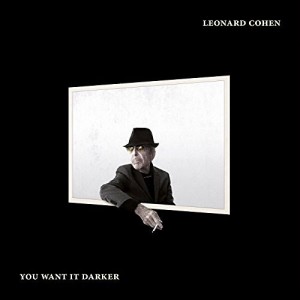 It was a strange twist of fate which saw Leonard Cohen die so shortly after the release of his 14th, and ultimately final studio album. Unlike Bowie though, earlier in the year, "You Want it Darker" wasn't composed with his own death in mind. Naturally, mortality gets mentioned, but on which Leonard Cohen album didn't it!?

In his second interview to promote the record, Cohen had backtracked on a previous recent statement that he was "ready to die" and when distant muse and lover Marianne passed away earlier this year, Cohen's email to her in her final days had been made public, saying "I think I will follow you very soon". But his backtracking was funny and flippant saying he'd always had a gift for drama and intended to "live forever". Two further records were also suggested. As we now know, this wasn't to be.

"You Want It Darker" is definitely more sombre in tone; minimal and stately, he uses a co-writer for the instrumentation, and tastefully takes in soul, doo-wop and ofcourse folk traditions. But lyrically, whilst he mentions putting his "house in order", he's far from singing his own last rites. He does say in the title track that he's "ready Lord", but then treats us to such beautiful poetry and subtly varied sounds that the listener can't help but respond, " fair enough, but not YET!?"

An excellent album then, made instantly more dramatic by his sudden demise, but whilst the record comprises "lullabies for suffering" and yes it's soothing (and funny) as ever, he also notes that he "struggled with demons, they were middle class and tame." Acceptance, humour, just as you'd expect. A noble and fitting ending for one of the counter-culture's (remember that!?) true greats.