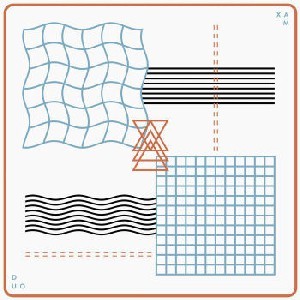 New outfit formed by Matthew Benn of Hookworms and Christopher Duffin of Deadwall. Its six tracks of improvised ambient beauty are both meditative and peaceful, it is astral jazz with an experimental kosmische undercurrent; modular synths meet saxophones; Cluster meets Terry Riley; Laurie Spiegel meets Pharoah Sanders; Ohr meets Impulse!. A warm, immersive and downright musical record, it rewards repeat listens. XAM was originally Matthew’s solo project, the name borrowed from the closing song of latter-day Dusseldorf-via-Detroit cult classic ‘Subway II’. He recorded a number of tracks at home between Hookworms albums in 2014 which were released last year as the ‘Tone Systems’ EP on Deep Distance.

Christopher says he approaches each song as a “mini-soundtrack to an imaginary film that doesn’t exist yet” and reveals that, while he was practising at home, he played along to clips of ‘There Will Be Blood’, ‘Mulholland Drive’ and ‘Synecdoche, New York’ to get the requisite atmosphere. Live sets are also completely improvised, meaning no two shows are ever the same. “I appreciate that improvised music isn’t for everyone, but it’s something I love doing,” Matthew concludes. “And, more often than not, Chris and I create something beautiful together

Barry says: Otherworldly developing ambience and celestial synth swells, gradual building and eventual fragmentation turn this into a tour-de-force of Reich-esque structural integrity. Jazzy interludes give way to churning echoes, while hints of percussion give just enough purpose to direct the cloud of blissful fog.