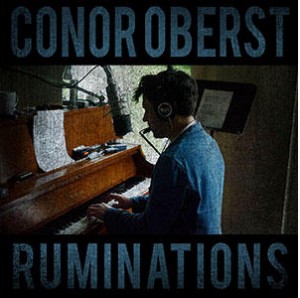 ‘Fans take for granted that Mr. Oberst will reveal his every thought to them, from romance to personal philosophy to politics. He’s the image of sensitivity... Yet [he] isn’t just singing his diary… He also measures out every musical and verbal effect. The craftsmanship makes him seem even more unguarded.’ – New York Times

In the winter of 2016, Conor Oberst found himself hibernating in his hometown of Omaha after living in New York City for more than a decade. He emerged with the unexpectedly raw, unadorned solo album Ruminations. “I wasn't expecting to write a record. I honestly wasn't expecting to do much of anything. Winter in Omaha can have a paralyzing effect on a person but in this case it worked in my favor. I was just staying up late every night playing piano and watching the snow pile up outside the window. Next thing I knew I had burned through all the firewood in the garage and had more than enough songs for a record. I recorded them quick to get them down but then it just felt right to leave them alone,” says Oberst.

Oberst began publicly releasing music in 1994 at the age of 14. Those early recordings, made in Omaha on four-track cassette by Oberst and his friends, were an introduction to the work of a prodigious songwriter whose creative outpouring would soon be widely lauded. Writing and recording prolifically over the next two decades, first with his band Bright Eyes and later under his own name – and at special moments as a member of Desaparecidos and Monsters of Folk – Oberst became known, the Los Angeles Times said, as an artist who ‘sees the world with fresh and fearless eyes’. The Times continued, ‘He weaves his findings into intimate songs whose melodies are as timeless as a hymnal and whose images are hauntingly poetic... He can command your attention with long narratives that have more words than a pocket dictionary, or stop you cold with a single line.’

In Nebraska last winter, songs that hark back to that earlier era unexpectedly began to take shape. Oberst went to ARC, the studio he built with his Bright Eyes bandmate and longtime friend Mike Mogis, to record that music. With the help of engineer Ben Brodin, he recorded all the songs in the span of 48 hours. The results are almost sketch-like in their sparseness, and they ultimately became the songs that comprise Ruminations. These tracks do not have the multi-layered instrumentation of the most recent Bright Eyes and solo albums: This is Oberst alone with his guitar, piano, and harmonica; the songs connect with some of the rough magic and anxious poetry that first brought him to the attention of the world, while their lyrical complexity and concerns make it obvious they could only have been written in the present.