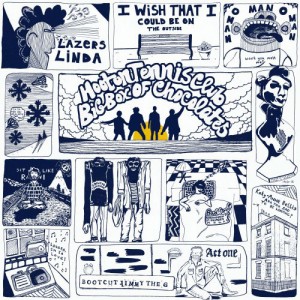 If their debut album, ‘Highest Point In Cliff Town’, released in August last year, was Hooton Tennis Club’s sprightly statement of intent, ‘Big Box Of Chocolates’ may well be their coming of age - a record that retains all the colour and invention of their debut while being elevated by richer instrumentation and lyrics that hint at slightly heavier themes: love and loss, nihilism and the ‘non-spaces’ of Northern England, all delivered in the band’s typically laconic, bittersweet style, like a Mersey Beat Murakami.

Recorded over three weeks in Helmsdale, during which time they all grew beards, drank copious amounts of tea and became birdwatchers and whiskey tipplers, the album reflects the band’s relaxed approach to songwriting. They tend not to labour over recording demos or strumming and beating the life out of songs in the practice room. Instead, ideas are allowed to form spontaneously: melodies are hummed into phones or computers, lyrics batted back and forth, songs worked out alone in the bedroom, or layered up from scratch together in the studio.

Barry says: A fancy-free and assured romp through the recesses of indie-rock and late psychedelia ; jangly guitar melodies and waves of reverbed drums all topped with emotive but relaxed vocal wanderings. Imbibed with melody and soul, but heavy and grooving enough to keep you moving. Rock out with your Big-Box-Of-Chocs out.