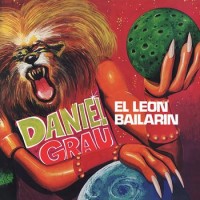 This 1980 album from Venezuela shows all the trademarks of its creator Daniel Grau. The spaced-out disco grooves live on (and on and on!), though this time with some nifty female vocals aspirated gently upon the lightfooted waves of synthesizer melodies. While the title track takes us sky high with rhythmic guitar, laser fire and exotic disco vocals, continuing the futuristic vibe of "Disco Fantasy", "Aparte" marries a Chic-style rhythm section with woozy Latin synth licks and "El Fenix" funks us all the way out with some AOR breaks. Though deep disco is very much the order of the day, Grau throws us a genuine curve ball via the possible standout "Con En Cielo En Tus Ojos", a lush and utterly relaxed floating Latin pop number with a repetitive vocal line and truly laidback groove. If this psychedelic trip into pastoral folk found its way onto an Air LP or the recent Avalanches record you wouldn't be at all surprised - heavenly stuff. No wonder that this long out of print gem fetches triple figures among collectors. If you like your disco lithe and lysergic, you've gotta grab a copy of this beautiful reissue.