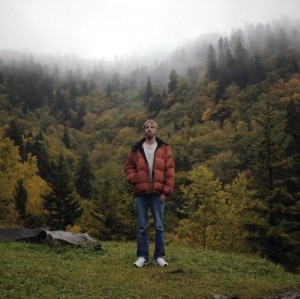 The music made by Luke Roberts is wide in scope and spare in structure. It is as universal as it is personal - if you have to label it, the right stamp to put on it might be ‘redemptive blues’. Roberts’ songs, while deeply personal in origin, touch on universal life experiences and emotions. ‘Sunlit Cross’ is unwaveringly honest and raw, as Roberts gets closer than ever to his true self: a person who looks past the dark truths to see a real light.

‘Sunlit Cross’ was recorded at RonnieJone$ound with Kyle Spence (who, in addition to recording tracks for Kurt Vile’s ‘B’lieve I’m Goin Down’, also drums with Vile and Harvey Milk). Spence worked closely with Roberts to make the record sonically richer than ever before.

“His appreciation of the spiritual beauty of those classic sounds [Americana and southern blues] has given his music a rich warmth.” - musicOMH

“Luke Roberts is singing about the no-place of everyplace, the desolation we all know” - Pitchfork

“His voice is somewhere between Townes Van Zandt and Kurt Vile - young and wise, but with an even-older worldview and simplicity.” - FILTER Magazine

“Roberts’ vocals (which contain all the cackle of J Mascis and all the plaintiveness of Townes Van Zandt) are tender and bruised, and… can be legitimately heartbreaking.” - Pitchfork