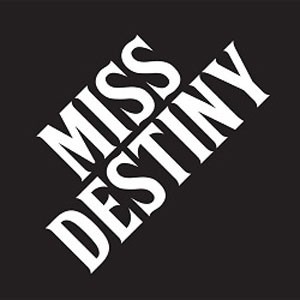 Miss Destiny are a band from Melbourne, Australia who play music that’s reminiscent of a mythical time when guitar music’s material of choice was transitioning from denim to leather. Post-hippie, pre-punk era rock ‘n’ roll meets the origins of New Wave of British Heavy Metal, with a glimmer of Sunset Strip feel-good excess. While this could sound like another careful curation of rawks past, and eggheads could argue about the relevancy of rock music in 2016, there’s a life and spirit in this band beyond the typical genre curations that often render rock music one dimensional.

Their self titled debut album is released by R.I.P. Society Records / Agitated and was recorded across a couple of hot summer days in 2015. The all-female line-up on the recording was Harriet Hudson (Circle Pit, Ratsak, Southern Comfort), Harriet Stewart (Sleepless Nights, School of Radiant Living), Annie Llewellyn (Grotto, The Angel & Baby Chain) and Emily Jans (Straightjacket Nation, Bloody Hammer). This record extends on the “muscle and bite” (Evan Minsker, Pitchfork) of their debut 7” on Hozac Records, with a startling leap in the departments of power, precision and overall toughness. No doubt this has to do with powerhouse Emily joining behind the kit, who recorded both this and the forthcoming Straightjacket Nation record while very pregnant! Find another example of this in punk/hardcore/rock ‘n’ roll history, I dare ya.

The track “Killers” focuses on the horrendous effects of domestic violence, it’s Miss Destiny’s reaction to the number of women murdered or harmed by domestic violence in Australia in 2015 - a big ”go fuck yourself” to the perpetrators, and a song for those affected and those who stand up against the perpetrators to draw strength from, and party to.

It might be said that any time a woman rebels against archaic societal gender roles by playing music and having a voice, it’s a political act. And while this record label and Miss Destiny would agree with this, the band are weary of being positioned as such - they’re just just a rock band having a good time. They possess a self-deprecating sense of humour and deep appreciation of the excesses of rock ‘n’ roll - shared beers, shared jokes, shared experiences. Miss Destiny are having a laugh while sticking it to the man.

The ladies in the band say their main influences are KISS and Danzig, but I can hear a bunch of gals from a punk/D-I-Y/basement rock perspective getting hip to Di’anno era Iron Maiden and Girlschool. But mostly it just sounds like them being their true selves, fierce and fun.

Like the Runaways if they recorded for Neat records.. .Denim and Leather and Studs and Bullet Belts!!!!