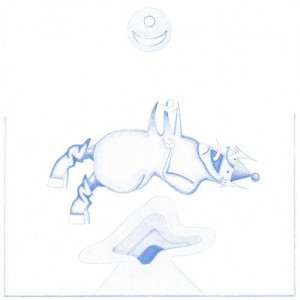 Devendra Banhart was born in Houston, Texas, and moved with his mother to her native Caracas, Venezuela, when his parents separated. The family relocated to Los Angeles during his teenage years; it was there that he learned to speak English, skateboard, and play music. Banhart first began to perform in public while attending the San Francisco Art Institute. He has since lived in New York City, Paris, San Francisco, and Los Angeles, where he currently resides.

Banhart first attracted international notice with his 2002 debut album, Oh Me Oh My… The Way the Day Goes By the Sun Is Setting Dogs Are Dreaming Lovesongs of the Christmas Spirit – a collection of recordings he had made for himself. Subsequent albums include Rejoicing in the Hands (2004), Niño Rojo (2004), Cripple Crow (2005), and Smokey Rolls Down Thunder Canyon (2007), and What Will We Be (2009). Mala, his Nonesuch debut, was described by Q as a ‘career-best’ and by the Wall Street Journal as his ‘most concise, hushed and winsome effort to date’. Banhart has collaborated with fellow musicians including Anohni (formerly known as Antony) and the Johnsons, Beck, Vashti Bunyan, Os Mutantes, and Vetiver. He also has performed with both Gilberto Gil and Caetano Veloso, and was part of a David Byrne–curated concert at Carnegie Hall.

An accomplished visual artist, Banhart’s distinctive, minutely inked, often enigmatic drawings have appeared in galleries all over the world, including the Art Basel Contemporary Art Fair in Miami; the San Francisco Museum of Modern Art; the Palais des Beaux-Arts in Brussels; and Los Angeles’ Museum of Contemporary Art. In 2015 Prestel published I Left My Noodle on Ramen Street, a collection of his of drawings, paintings, and mixed media pieces. He has created the cover art for most of his records, and in 2010 his artwork and packaging for What Will We Be was nominated for a Grammy.

Ape in Pink Marble, Devendra Banhart’s ninth album, was written, produced, arranged, and recorded in Los Angeles by the singer/songwriter/guitarist with his longtime collaborators Noah Georgeson and Josiah Steinbrick, both of whom also worked on Banhart’s most recent album, Mala (2013).