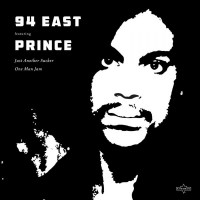 Charly turn up another essential bit of Prince here, with a 12" pressing of purple legend's earlist work. Formed in December 1975 by Pepe Willie (the former husband of Prince's cousin), 94 East was the Minneapolis-based funk group with which Prince first came to prominence. Willie was a key player in launching Prince's career, spotting his many talents and quickly enlisting the young maestro into 94 East (named after Interstate 94 in Minneapolis). Alongside Willie, Prince composed one song for them, "Just Another Sucker", newly remastered for this release along with "One Man Jam". These are two of a collection of epic tracks laid down by the band between December 1975 and February 1979, with Prince's nascent musical power to the fore. The band disbanded in 1979 when Prince became a star in his own right. And the rest is history...

Just Another Sucker
One Man Jam

Isaac Hayes And The Bar-KaysDo Your Thing