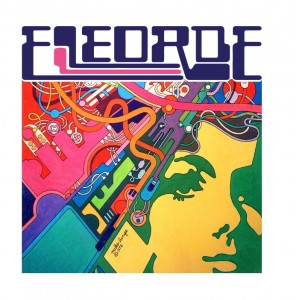 In the space of four tripped out releases, Forest Jams have established themselves as the go-to label for any long travelling, genre staddling space cadets in search of sounds from beyond. Originally an edit-only affair, after three psychedelic dancefloor spectaculars from Albion, Spaziale and Mori Ra, the imprint switched things up and invited Basil & Rogers to take us on a kaleidoscopic voyage into the furthest regions of the live disco universe with an EP of their own compositions. Now, chief starman Elleorde bursts through earth's atmosphere and drops into orbit around that great mirrorball in the sky with four tracks of wormhole disco, cosmic funk and starry-eyed Balea-rock. Elleorde was born 3 years ago at Camp Cosmic, an anything-goes music festival in a Swedish forest that's recently been transferred to the countryside of Germany. Elleorde's debut record shares the same themes as the festival - with a combination of time travel, the cosmos, space journeys, sunsets on exotic planets, and love in space. The set opens at warp speed, blazing through the night sky on rapid fire sequences and a roaring 4/4 rhythm. Thick wah guitar licks and squelching bass bubble up with a wormhole churn, building the dancefloor density before that Spanish guitar and whistled melody harness the bright sun in Morricone's spaghetti sky. The tempo drops for "My Cosmic Partner", an astral love song alive with solid bass, chiming West Coast guitars and buzzing synth-work. Standing firm with a foot in both the disco and rock camps, this seventies style masterpiece wears its flares with flair, letting that hair drift in the solar winds. Over the corner and we find Elleorde firing up the hyperdrive with the steely beat of "Europa From Mars", an intergalactic boogie bomb complete with stomping bass, dreamy keys and more laser fire than a Death Star trench run. Finally, "Some Piece Of Love" finds Elleorde flying at full tilt, blasting his way through the electrodisco singularity thanks to Bobby O styled bass, noodly vocoder and a properly proggy chord progression. Summoning Tantra, Chilly and Patrick Cowley into Seth Brundle's Telepods, the UK producer manages a flawless gene splice to create the perfect space disco entity. So, with no more delay, step in to the time travel machine, "Open Wide and Eat the Future".

A1. Black Talon
A2. My Cosmic Partner
B1. Europa From Mars
B2. Some Piece Of Love