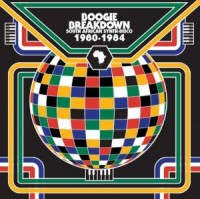 True to form, Boston-based label Cultures of Soul is set to release a compilation of obscure disco from a far-flung corner of the world. After forays into India and Brazil, they now turn their attention to South Africa. South Africa is home to a dizzying variety of musical genres and traditions, including some that look directly to American sounds for inspiration. In the late 70s and early 80s, many of the country’s best young musicians were guided by funk. All over the world, disco was growing harder and more electronic, with new synthesizers entering the market every month. The southern tip of Africa was no exception. Global music industry geo-politics, however, aided by the country’s pariah status and a UN-sanctioned cultural boycott, prevented the vast majority of this music from ever being heard outside the country, nor ever being released on CD or digitally. Until now. Compiled by Cultures Of Soul head honcho Deano Sounds in collaboration with Johannesburg-based DJ Okapi from the Afro-Synth blog and record store, Boogie Breakdown serves up two tracks apiece from six seminal acts from the era - Harari, The Cannibals, Neville Nash, Benjamin Ball, Don Laka and Al Etto – to offer a glimpse into this long-forgotten era in African music history. A period of true innovation and new possibilities – as well as isolation and political instability – the early 80s in South Africa saw the emergence of numerous talented, innovative artists, whose efforts soon gave rise to the big-selling ‘bubblegum’ sound of the mid-80s. As the decade wore on, this sound shed its American roots and took on more local influences, becoming ever more electronic and less funky, to become the kwaito of the 90s and ultimately the house music of today. It all started with the arrival of synthesizers and the creativity of producers and artists featured on this compilation - pioneers
of a new sound before it became established and marketable – global in its appeal, yet rooted in Africa

Matt says: So, you have Harari's "Good Vibes" (recently edited by none other than Neil Diablo) and Don Laka's "I Wanna Be Myself" (currently none available of discogs at all) on one comp. I'm already sold! The rest of the tracks are dope too. And we all know Cultures Of Soul do this shit proper. Immense.