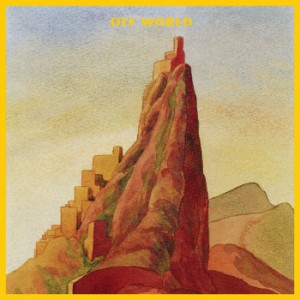 Celebrated Toronto-based composer, producer and songwriter Sandro Perri is one of Constellation's most long-standing and artistically diverse music-makers, known both for the pulsing, longform instrumental work released in the early 2000s as Polmo Polpo and the tropicalia-, jazz- and prog-influenced vocal music brilliantly showcased on 2011's Impossible Spaces. Over the past couple of years Perri has been letting us in on a fascinating treasure chest of strange and enchanting collaborative recordings, which, now rounded up under the project name Off World, will begin to see release over the next few seasons. Chiefly a studio-based endeavour, the project traces its origins as far back as 2008 when Perri and fellow Torontonian Lorenz Peter began working together, now expanded to encompass collaborations with many other producers and musicians, including Drew Brown (Lower Dens, Blonde Redhead), Susumu Mukai (Zongamin), M J Silver (Mickey Moonlight), Craig Dunsmuir, Jesse Zubot and Eric Chenaux. 1 is alien electronics played humanly, with real-world accents throughout, rich in deconstructed melody, interplay between acoustic and electronic instrumentation, and pointillist and aleatory composition techniques. Off World resists easy categorization: not ambient "easy listening", not strictly "improvised", not "retro" - but eccentrically absorbing and soothingly mischievous as it charts its own sonic trails.

Barry says: A spooky and fascinating trek through jazz, modern-classical and experimental synth music in one engrossing package. 'Old Brain' is as minimal as it gets, placing emphasis on one central warped synth line, gradually ring-modulated into oblivion. 'Extraction' takes the violins found on other Constellation staples, and turns them into a slow-mo whirling drone, both meditative and industrious. 'New Brain' on the other-hand is a future-facing synthetic melody, imbued with an inherent fragility, and driven forward in seemingly incidental increments. A Beautiful journey, but one that demands your attention.