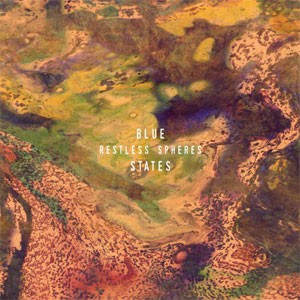 It’s been nine years since we last heard from Blue States, the moniker for the musical outlet of Andrew Dragazis. Recorded, produced and, for the most part, played by Dragazis at his Lightwell studios in Stoke Newington, London, ‘Restless Spheres’ doffs its cap to the soundtracks of Budd and Morricone, to 60s Greek bands such as The Forminx, to German electronic pioneers Dieter Moebius and Michael Rother and to American minimalist composers Steve Reich and Phillip Glass.

Blue States began nearly twenty years ago with the young, movie soundtrack obsessed Dragazis writing and recording largely instrumental, electronic pieces alone at his parent’s house in Sussex. Music had always been around in his family, his father having been involved in the Greek pop scene of the 1960’s, jamming in Athenian clubs alongside pre-Aphrodite’s Child legends Demis Roussos and Vangelis.

The recordings found their way to nascent electronic label Memphis Industries, who went on to release a succession of 12”s including the smooth electro sweep of ‘The Trainer Shuffle’ and the filmic ‘Yé-Yé’ stylings of ‘Your Girl’. An album, ‘Nothing Changes Under The Sun’, followed in 2000 and became a surprise hit, seeing Dragazis form a band, tour the world, remix Future Sound Of London, work with Roy Wood and sign to XL Recordings. Subsequent albums ‘Man Mountain’ and ‘The Soundings’ saw Dragazis work with more traditional song structures (including ‘Season Song’, the title track of cult Zombie flick ‘28 Days Later’) and collaborate with vocalists Ty Bulmer, latterly of New Young Pony Club and old school friend Chris Carr. 2007’s ‘First Steps Into...’ saw Dragazis revert to working solo and heralded a return to his electronic origins with more extended, free form soundscapes.

On ‘Restless Spheres’ Dragazis draws on all four of his previous albums to create something entirely different, an album imbued with a subtle majesty and hope filled melancholy.