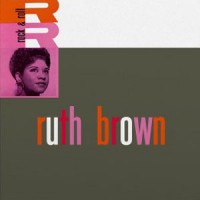 Ruth Brown was an American singer-songwriter and actress, sometimes known as the “Queen of R&B”. She was noted for bringing a pop music style to R&B music in a series of hit songs for Atlantic Records in the 50s, such as “So Long”, “Teardrops from My Eyes” and “(Mama) He Treats Your Daughter Mean”. For these contributions, Atlantic became known as “The house that Ruth built” (alluding to the popular nickname for Old Yankee Stadium).

In Brown’s first audition, in 1949, she sang “So Long,” which ended up becoming a hit. This was followed by “Teardrops from My Eyes” in 1950. Written by Rudy Toombs, it was the first upbeat major hit for Brown. It was Billboard’s R&B number one for 11 weeks. The hit earned her the nickname “Miss Rhythm” and within a few months Brown became the acknowledged queen of R&B.

Ruth Brown Rock & Roll is an album featuring tracks recorded between 1949 and 1956.