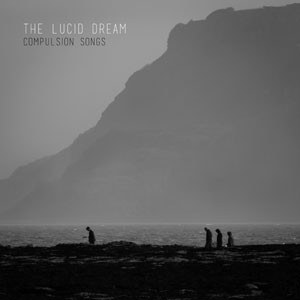 Compulsion Songs is the 3rd album from Carlisle's The Lucid Dream. Rather than bathe in the critical acclaim of their recent 2nd album, The Lucid Dream are quick out the blocks, venturing into pastures new again, making no secret of their aim to separate themselves from their peers as much as possible. On Compulsion Songs, pulling away from the pack is the order of the day, and the ideas on show here reaffirm the many claims that The Lucid Dream are one of the most important, diverse and exciting bands in the UK at present. Compulsion Songs is a demonstration of the band’s skill in binding the sounds of their broadening musical palette through their unifying songcraft.

Recorded at Whitewood Studios, Liverpool, with Rob Whiteley, the album is produced alongside long-time collaborator Ross Halden (Ghost Town Studios, Leeds). Recent single Bad Texan (the first work from the album unveiled via 12' vinyl in March this year) sees the band move into dancefloor meets Krautrock. The Krautrock/kosmiche groove is also present alongside new-wave in the 2-part opus Nadir/Epitaph. 21st Century is quite appropriately the nearest the band get to a protest song, a 2-minute white noise/garage/rockabilly blast, inspired by a heavy dose of Beastie Boys listening. Elsewhere, the bustling of The Emptiest Place is Morricone meets 60s L.A, Stormy Waters bows to the melodies of The Stone Roses/The Byrds, warping them with a sinister twist in the vein of Spiritualized. The album’s showpiece however comes via the 8-minute space-dub of I'm A Star In My Own Right, as the band hit a full on Kingston, Jamaica dub/groove, set as it is to contorting, reverb-fueled passages.