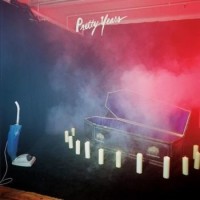 Pretty Years, the wildly ambitious fourth LP for Cymbals Eat Guitars, is easily the band’s most sonically enigmatic and most rewarding album yet. Their trademark cacophonic guitar rock and innate propulsion are still abundant, but they’re buttressed by raucous synth and keyboard lines, and an extemporaneous saxophone performance, which enrich when they could easily clutter these songs. The band also worked more quickly and efficiently than they had in the past, facilitated by years on the road in which they’ve played close to a thousand shows, which rendered them a tight, fully-oiled machine in the studio. Opener “Finally” shimmers with complex beauty, leading into the sweet rush of “Have a Heart,” which finds lead singer and guitarist Joseph D’Agostino singing, “I’m so out of sync / And you’re out of sync with me,” which could well be a mantra for the visceral appeal of this superb record. The entire album is rife with electrified, flashbulb moments—“4th of July, Philadelphia (SANDY)” conveys the madness of life on the road, exhibiting D’Agostino’s uncanny ability to transform minutiae into profundity. This skill is evident in spades on the record’s centerpiece and opus, the disarmingly vulnerable “Dancing Days.” The song also exhibits the contributions of Whipple, and slyly invokes the album’s title in its magisterial chorus, as D’Agostino contritely croons, “Goodbye to my pretty years.” And indeed, Pretty Years is a roller coaster ride, both lyrically and sonically, that encompasses what it’s like to be alive and in the moment. But ultimately, this is an album that keenly captures the magic and loss attendant to living life wide-eyed, and hints that these “pretty years” may portend even prettier ones to come. “On the lead single from this year’s Pretty Years, these young Americans have gone full ‘Tenth Avenue Freeze Out,’ embracing ’70s rock in all its brassy pomp and soulful stomp. When these guys said they wanted to make a more energetic album, they must have meant one you could dance to.

Barry says: Think hazy summer montage : diving off a rope swing into one of the great lakes, people laughing at outdoor parties, throwing frisbees or spraying their mates with a hose whilst washing their car. This is effervescent and upbeat indie-rock, filmic and feel-good. Jangly guitars and open-closed-open snare hits, topped with demi-punk vocals (slightly snarling, filled with youthful growl and vim). Things take a punkier turn on songs like 'Beam', where 'Close' is a slightly more meditative minor-key affair. Closer 'Shrine' is a natural culmination on this increasing emotive arc, encompassing elements of all of the previous tonal shifts, whilst retaining the sound that really makes them "them". A fulfilling and thrilling ride, and one i'd be happy to take again.