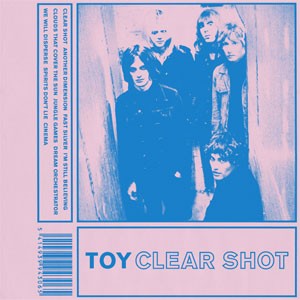 Splitting their time between Tom Dougall and bassist Maxim Barron’s place in New Cross and Dominic O’Dair’s flat in Walthamstow, where they set up a makeshift studio and laid down the early album demos, Clear Shot began to take shape in the first half of 2015.

Taking inspiration from an esoteric blend – Radiophonic Workshop, Comus, the scores of Bernard Herrmann, John Barry and Ennio Morricone Fairport, COUM, Acid House, Incredible String Band, The Langley Schools Project, The Wicker Man soundtrack and even the direction behind Electric Eden, Rob Young’s book about the development of folk music in the U.K. – by the time they entered Eve Studios in Stockport in October 2015 with producer David Wrench, the band were clear about the direction the album should take.

The result is their most coherent and confident album to date; lushly cinematic, shot through with their most expressive melodies thus far and coated with a ‘sheen’ courtesy of Chris Coady (Beach House, Smith Westerns, Yeah Yeah Yeahs), who mixed the album in LA with some of the reverbs and vocal processors used on Purple Rain, across the 10-tracks strands of ideas appear, sink and re-emerge in an almost modal jazz manner. Clear Shot sees TOY working both in bigger colours and more minutely crafted detail, achieving an altogether higher level of artistry than before.

Andy says: Toy released two superb records within a year of each other (2012/13) then vanished for 3! They return with by far their best yet: darker, spookier but somehow poppier, this extends their shoegazey take on psych and garage into a much higher realm. Like the House Of Love but with way more going on. Brilliant.

Ryan says: Clear Shot sees TOY working both in bigger colours and more minutely crafted detail, stripping back a little to reveal a bigger picture. This could be their most coherent & confident album to date.