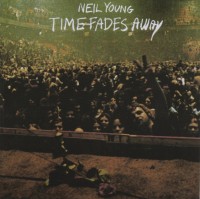 Neil Young has said that "Heart Of Gold", 'put me in the middle of the road. travelling there became a bore, so i headed for the ditch.'

"Timefades Away" was Young's first installment of what would later become known to his fans as his "Dirt" trilogy. Released in 1973 straight after the success of "Harvest", it was almost a double f-you to record company and audience, from a success weary artist who wanted to be just that: a proper artist, free to release whatever he liked, unburdened by any showbizness hoop-jumping.

Recorded live on the tour which followed the hippyish and mellow biggest record of his career this was genuinely shocking in its brutal heavyiosity. Tequila soaked, beligerent and dark, here Neil stood, naked and honest. One diamond in this mire was the heartbrakingly beautiful "The Bridge". One of the best tracks Neil Young ever wrote.