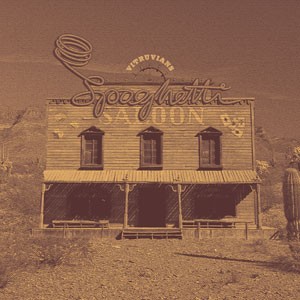 There’s much to be said for chance meetings. Vitruvians – in their words, “a meeting of minds, cultures, styles and experiences, powered by music, and designed by faith” – owe their very existence to once such random encounter. In the summer of 2014, producers Frankie Valentine and Thomas “T-Ash” Sciurpa bumped into each other in a London shoe shop. Over a fine selection of brogues and loafers, the conversation drifted onto music. The duo quickly realized they had much in common, and a plan began to form: they would get together and make music as Vitruvians, using the alias as a vehicle for their collaborative work. Some 18 months and numerous recording sessions in England and Italy later, the first Vitruvians record is ready for release. Dropping on Paul Murphy and Simon Purnell’s Leng Records imprint, “Spaghetti Saloon” is a banjo-pickin’ hoedown at the last drinking hole in the Milky Way. Propelled forwards by a restless drum machine rhythm, the duo’s original version expertly combines winding synthesizer melodies, wild honky-tonk piano solos, clanging ‘closing time’ bells, and the most loved-up banjo player in the galaxy. Ennio Morricone, eat your heart out.
The flipside of the 12” features a pair of tasty, DJ-friendly revisions. There’s the chugging Banjo Dub, where delay-laden bells and undulating banjo lines rub shoulders with a throbbing, space disco groove, and the even more psychedelic and alluring Piano Dub. As the title suggests, this pushes the duo’s distinctive keys work to the fore, stretching out the life affirming solos in a bid to incite even greater dancefloor abandon. Down a glass of bourbon, grab a partner, and get dancin’.