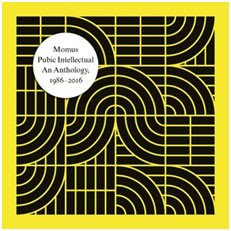 Scottish artist Momus – the performing alias for Nick Currie – has curated a fascinating body of work over the course of the last 30 years for labels such as Creation, Cherry Red, Analog Baroque and él. For thirty years, Momus has been releasing albums to critical success. In his lyrics and his other writing, he makes novel use of decontextualized pieces of continental (mostly French) philosophy, and has built up a personal world he says is "dominated by values like diversity, orientalism, and a respect for otherness." He seems fascinated by identity, Japan, Rome, the avant-garde, time travel and sex.

Celebrating his 30th anniversary, Pubic Intellectual is the first Anthology to document Momus’ entire recorded output. Carefully compiled and annotated by the artist, with artwork by his chosen designer, this is a very personal statement. Included are many of Momus’ most acclaimed songs – such as ‘The Hairstyle Of The Devil’, ‘Lucky Like St. Sebastian’ and ‘Murderers, The Hope of Women’. Pubic Intellectual also draws on Momus’ most recent albums from the noughties, such as Bibliotek, Bambi, Turpsycore and Glyptothek.