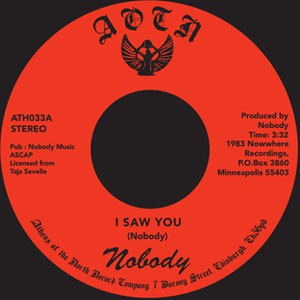 Mind blowing Minneapolis boogie, there is so much to this story but let's start with their original 1982 press release:

During the 1960s the American popular music scene was overtaken and dominated throughout most of the decade by a creative surge emanating from Detroit. "The Sound Of Young America" was Motown. As Motown declined another inspired voice took up the slack. Under the direction of Kenny Gamble and Leon Huff, Philadelphia International, aka "The Sound Of Philadelphia" (TSOP), became the new voice under the early and mid-70s.

As is becoming quite apparent, the 1980s belong to the Twin Cities. Most people thought it would stop with Prince. It hasn't. A new band called Nobody is making sure that it doesn't. And although the group has been wrapped in mystery ever since they started just four months ago, their recently released demo tape (which will shortly be pressed on vinyl) is a monster that has music insiders buzzing with enthusiasm, "Right now nobody knows who we are. Once we become established, however, we will be casting a highly creative shadow that will be profound, and that other people will have to live up to," says the group.

The band has seven members: two vocalists-one male and two keyboard players, one guitar, bass and drums. All but one of the members are from the Minneapolis / St. Paul area, providing how fertile our sometimes mild little town can be. They've all had a diverse amount of experience-from jazz to funk - but their music doesn't fit any particular category. Some of Nobody's members even started out in the church, which gave their music a genuinely soulful feeling that can't be denied.

Nobody was primarily put together by the female lead vocalist; a lady who's sung with manyTwin City jazz and gospel greats. But beyond anything else the band is a team. A team with a mission. A mission to bring quality music to the community. Many of you will soon get to judge the sounds of their debut songs for yourself. KMOJFM is getting ready to add the single "I Saw You" to its playlist, and WLOL's music director said he "loved it." Along with the airplay will be an appearance on Scott Thompson's "Showcase" on KWTN

Meanwhile the group's manager, Jordanna Gold is keeping busy on both coasts attempting to hook up a deal with one of the major labels for this dynamic, multi-talented group that many people say will be busting out by grammy time."