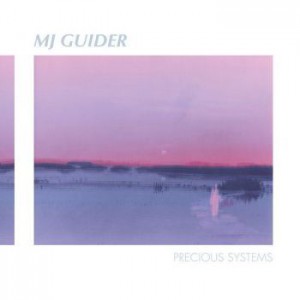 Melissa Guion is MJ Guider. She lives and works in New Orleans and previously released the Green Plastic extended play cassette in early 2014 on the Constellation Tatsu label.

Employing heavy washes of bass and a deft touch in mixing, she uses stark contrasts to construct a semi-surreal aural space.

What results are songs that exist in a wholly contained sound environment, minimal yet lush, spare yet saturated, and most importantly, entirely compelling.

From MJ Guider:
“Precious Systems is inspired and influenced by the landscape in and near New Orleans, particularly the juxtaposition of the natural with industrial and commercial constructs as they reflect life here.

The songs on the album attempt to create contrasts of their own as one means to induce unreality or alter perspective. While it is greatly influenced by science fiction, its sounds and stories often become it themselves.
The sounds come from a variety of sources, but are anchored by a few aging, outmoded machines.

A beloved Rickenbacker 3000 in combination with a Roland R-8 drum machine, and RE-501 tape echo set the tone of technology in subsidence.”

Barry says: Though it might seem unlikely, gothic tinged shoegaze/ambient has seen a bit of a surge in recent years. Tropic of cancer being a notable (and equally excellent) recent addition. Precious Systems is as haunting as it is enchanting, saturated top-heavy drones whirl around Guion's haunting voice, driven along by cavernous guitar, and every so often punctuated by driving hardware drum machines. Spooky and shadowed gothic shoegaze for the masses.