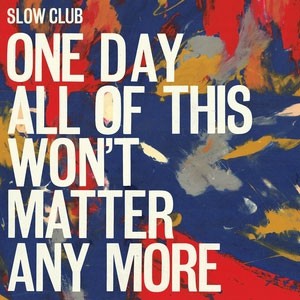 How do you keep a band interesting after ten years? It’s a question Slow Club’s Charles Watson and Rebecca Taylor must have asked themselves as they started work on their fourth album.The answer seems to be producer Matthew E. White, the master of Southern-gothic folk, whose in-house band at Richmond’s Spacebomb Studios provided the consistency and tone the album required. Almost every track was played live in the studio, allowing the long-established session band’s natural chemistry to augment Charles and Rebecca’s, with the double advantage of recording being very effective, and also comparatively quick.

One Day…. contains some of the best melodies they’ve yet created. The duo’s knack for writing hooks and melody has, if anything, become stronger. There are choruses here you instantly feel you’ve known your whole life, like ‘Ancient Rolling Seas’ timeless, reassuring refrain of “I’ll always be by your side”, or ‘Champion’’s Dolly Parton via-Linda Ronstadt anthem of self-celebration through the darkest times. Perhaps best of all are a pair of songs to be found at the top of what traditionalists would call “side 2”- ‘Rebecca Casanova’, a slice of widescreen, four-to-the-floor pop that recalls soft-rock giants Fleetwood Mac in the way it channels heartbreak onto the dancefloor, and ‘Tattoo Of The King’, a tale that takes Neil Young and the Doobie Brothers to the disco.

Barry says: Chemistry like this doesn't come along every day. It is clear from the offset that Slow Club work on another level of understanding : there is a warmth and subdued energy to all of these pieces that demonstrate how important that understanding is. 'In Waves' is assured Southern country of the highest order while 'Sweetest Grape On The Vine' could easily have some of the best close vocal harmonies i've heard for a long time. 'Rebecca Casanova' is perfectly stripped-back yet sounds surprisingly complete. Intoxicating and mesmerising songs with strikingly effective production. A triumphant return for Slow Club.