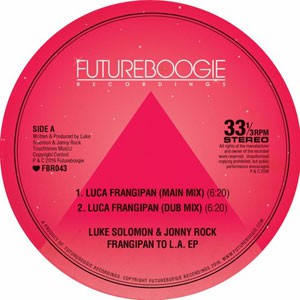 Luke Solomon has, for years, gifted the house community with countless musical gems, via his own productions and that of Freaks (alongside Justin Harris), as well as the vast catalogue of releases on Classic, the label he runs with Derrick Carter. Jonny Rock, meanwhile, has graced labels such as Wolf & Lamb, Playhouse and Music For Freaks (another of Luke’s imprints), and has amassed a fine appreciation for music working behind the counter at London record shop institutions, Black Market and Phonica.

“Luca Frangipan” stomps like any classic disco-house dub should do, built around a guitar hookline from the Chaplin Band's Italo classic 'Il Veliero', its funky bass lick and incessant cowbell wrapped up in guitar licks and idle piano keys. A “Dub Mix” dispenses of the bass riff and lets the synths get all ‘freaky deaky’ on yo ass.

“Groovin To LA” on the flip features an understated vocal hook, filtering around vintage disco tropes of parping horns and sweeping strings, as the beats, that elicits that trademark sound that Luke has made his own, rattle away gratifyingly.

DJ Fett Birger & Jayda G takes “Groovin To LA” on a wander to the seaside for a breezy and kitschy reinterpretation. Crashing waves and coastal sounds waft in and out of a gentle melodic rendition, the distorted yet supple percussive beats propping up the kooky Summer vibes just right.