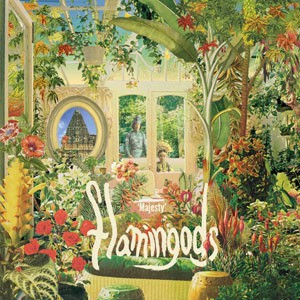 Flamingods are set to return with 'Majesty', the band's third album and debut release on Soundway Records.

With this new album the five-piece have taken their sound in a new direction with a rich and multi-layered album brimming with diverse influences that reflect their multi-cultural backgrounds.

The shimmering 10-track album crosses blissful psychedelia with a rich spectrum of the band's sonic inspirations.

'Majesty' was written and arranged with a conceptual narrative, cohesive both musically and lyrically, following the story of protagonist Yuka on his journey of enlightenment. The record is split in two, morning / light / good (tracks 1-5) and evening / dark / evil (tracks 6-10) that unravels track-by-track as the record plays out.

Patrick says: Possibly Bahrain's best known (or only) musical export, Flamingods have cooked up three albums in as many years, all without the most fleeting appearance on my radar. That is, until my girlfriend played me the stunning 'Anya', a subtropical sibling to Jonathan Wilson's 'Desert Raven' which blew my mind wide open. Gently psychedelic, totally musical and wonderfully exotic, 'Majesty' is a trip from start to finish.