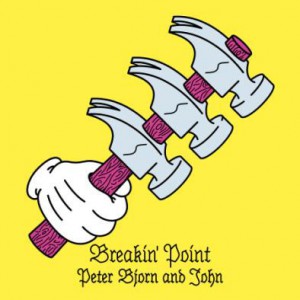 ‘Breakin’ Point’ is about the band's newfound search for another career high. “We started with some other album title ideas – like 'Thriller 2'. Then we realised we were pushing the envelope so got into the idea of a breaking point. If we broke it once, we can break it twice,” says Bjorn. That's why the album artwork features a hammer with three heads on it, not just to strike your nightmares, but to send a message out to everyone.

The trio's previous record 'Gimme Some' was Peter Bjorn and John's “power pop, guitar statement”, focused on recreating in the studio what they were confidently doing live. This time they wanted to do the total opposite. “This was about doing big pop songs,” says Bjorn, who recalls sitting around listening to ABBA with his bandmates, marvelling at how they made it sound and look so easy.

Dominos
Love Is What You Want
Do-Si-Do
What You Talking About?
Breakin' Point
A Long Goodbye
Nostalgic Intellect
In This Town
Hard Sleep
It's Your Call
Between The Lines
Pretty Dumb, Pretty Lame