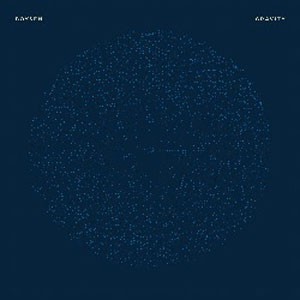 From ‘Only In The Dark’ to the two movements of ‘Nocturne’, it’s a serious, solemn listen. And yet, with pieces like ‘To The Hills’ and ‘Eos’, ‘Gravity’ is an exploration of heights, cliffs and vertigoes. With piano lines and choir-like drones, this record suits its title in all its meanings, as the magnetic force takes us deeper towards the core. Marking a new beginning, this debut reveals a touching, and more melodic side to Ben’s body of work, which he previously only hinted at as HECQ.

Friend and fellow Erased Tapes artist Nils Frahm mixed and mastered the album. Ben is not a master pianist like his dear friend, but his sound collages are so meticulously designed that after hearing the result an impressed Nils declared: “from now on, if anyone asks – this is a real piano”.

His intricate, humanised programming – enhanced by drummer Achim Färber, additional synthesisers played by Nils, and a considerate selection of echoes, delays and compressors – has been used to create a hybrid sound that intends to deceive, question and challenge existing listening habits. Utilising the contrast between reduction and decoration, ‘Gravity’ as well as its successor ‘Spells’ can be seen as a quest to find out how much or how little composition is required to constitute a song. Why the ear can and should be deceived about the authenticity of instruments. What significance these instruments have within this process, and why the personal perception of balance and sound exclude ultimate truths. Linking the two albums are the four movements of ‘Nocturne’, an ever-developing conversation that on occasion flirts with the grandeur of compressed rock drums. As HECQ Ben has released nine albums since 2003, exploring everything from ambient to breakcore. He has simultaneously established himself as a trusted composer and sound designer, working for a wide array of clients including Amnesty International and Marvel Comics; composing for feature films, games, art installations and convention opening titles.

After embracing this demanding line of work, in 2010 Ben felt the need to explore his roots and early education, which inspired these albums under his own name. Born in 1981 as the third child of opera singer Deirdre Boysen and actor Claus Boysen, his classical music training on piano and guitar began when he was seven years old; the works of Bruckner, Wagner and Bach laid an important foundation. Rediscovering this music shared with his parents – united with the sounds of Autechre, Cristian Vogel and Jiri.Ceiver to Pink Floyd and Godspeed You! Black Emperor – brought back an understanding of why he wanted to write music in the first place.