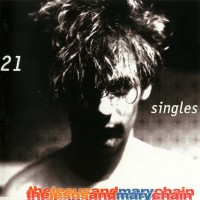 21 Singles will be available on vinyl for the very first time!!!

The Jesus And Mary Chain are a Scottish alternative rock band formed by brothers Jim and William Reid in their hometown of East Kilbride. Jim and William’s legendary song-writing partnership was first recognised in 1983 by Alan McGee’s highly influential Creation Records, where they released their debut single ‘Upside Down’ in 1984. The Jesus And Mary Chain went on to enjoy an illustrious career signed to Warner Music label Blanco Y Negro, releasing several critically acclaimed albums and cult singles such as ‘Just Like Honey’, ‘April Skies’, ‘Darklands’ and ‘Happy When It Rains’.

Originally released on CD in 2002, ‘21 Singles’ is a career spanning compilation featuring all the band’s singles in chronological order. Beginning with their Creation debut, the album takes us through fifteen years of The Jesus And Mary Chain’s indie and major label discography, travelling through their Blanco Y Negro heyday of the 80s and 90s, to their 1998 return to Creation. The album also includes their late appearance on Seattle’s legendary Sub Pop Records in the States. Many of the versions on ‘21 Singles’ are unique and alternative to their album counterparts.

LP1 Side One:
Upside Down
Never Understand
You Trip Me Up
Just Like Honey
Some Candy Talking

LP2 Side One:
Blues From A Gun
Head On
Rollercoaster
Reverence
Far Gone And Out
Almost Gold

The Jesus And Mary ChainDarklands