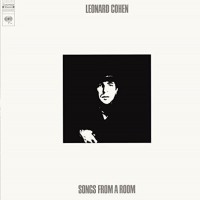 Cohen's sophomore effort "Songs From A Room" (recorded with producer Bob Johnston, renowned for his work with Bob Dylan, Johnny Cash, the Byrds and Simon and Garfunkel) was a worthy follow-up, boasting such enduring compositions as "Bird On The Wire", "Story Of Isaac" and "A Bunch Of Lonesome Heros".