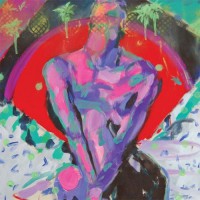 Recorded by Wild Palms in the same self-built Manor House studio where they made their 2011 debut ‘Until Spring’, new album ‘Live Together, Eat Each Other’ is a lusciously layered offering of hazy experimentalism and off-kilter alt pop, that follows in the auspicious lineage of Beach House, Cocteau Twins and TV On The Radio.

Half a decade in the works, ‘Live Together, Eat Each Other’ packs a lifetime’s worth of experience into 13 tracks, alongside a painstaking approach to recording that beams out of its shimmering glitches and collaged soundscapes. “Because we redid the songs so many times, and sat with them so long and went through so many transformations in terms of layering, it was kind of like the songs had eaten themselves and been regurgitated as something else,” explains Lou of the album’s title. “It seemed like the whole thing was this weird process of consumption and reconstitution. The time it took seemed to allow for a kind of gestation, or fermentation, period. It gave time for influences to bond and stick to each other. Things were made, smashed up into fragments and reformed repeatedly until we couldn’t really remember what it’d been before and it was just what it was. Darrell [the band’s guitarist and Saatchi approved artist]’s artwork followed the same trail as well, collage, re-working, painting, and blotting.”

‘Live Together, Eat Each Other’ is released through One Little Indian Records. The album was produced by the band’s bassist Gareth Jones and Liam Howe (Lana Del Rey, FKA Twigs) who was drafted in to coproduce and fine tune the record.