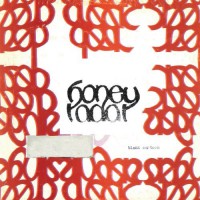 Beginning as a solo project for musician Jason Henn, Honey Radar’s previous output could probably fill up a small pallet of cardboard boxes. His debut album (2014’s ‘Chain Smoking On Easter’) topped out at a whopping 250 copies, leaving in its wake a steady trickle of CD-Rs and handmade, lathe-cut 7” EPs with release quantities of no greater than 50 apiece and often a great deal less.

Henn practices the stick-and-move philosophy of songwriting and on ‘Blank Cartoon’ Honey Radar continues to emphasize the merits of short songs and intricate, homespun production, lasting just long enough to get lodged permanently in your head before the next one comes along.

One can hear the hooks and craftsmanship of Guided By Voices, the atmosphere of Flying Saucer Attack and the authenticity of a carton of deadstock paisley oxfords stowed away since the 1960s, laced with injokes and references only about four or five people would understand. However, ‘Blank Cartoon’ is far from a joke - it’s essentially the first chance for Henn to get out in front of a wider audience, with a winning collection of new material ready to convert fresh minds to his cause.